The monument to fallen combat controllers was upgraded at the Combat Control School on January 26, 2017.  The new memorial is an upgrade to the Vietnam-era monument, honoring and remembering those who gave all while preserving our heritage and our way of life.

The new monument seemed to 'just' appear; a story carved in stone memorializing the history and heritage of Combat Controllers who had paved the way for those now joining the brotherhood, and qualifying to wear the scarlet beret.

The Monument memorializes those Combat Controllers that lost their lives in combat, and in training for combat operations.  It is a living tribute with a story of its own to tell.  The memorial was conceived, funded, created, constructed, delivered and installed by a team committed to preserving the past for the future, and for those Combat Controllers who are writing United States Air Force history today.

A larger foundation stone was incorporated into the memorial years earlier to increase available nameplate space.  The screw to stone mounts were failing due to corrosion caused by weathering and delamination.

The new, upgraded monument consists of a three stone set with a black granite center piece and two white outboard stones, engraved with the names of those fallen in combat and combat training.

From Concept to Design, Construction and Delivery 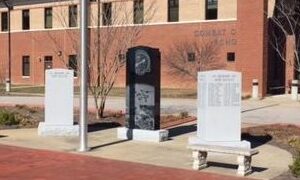 In early 2015, it was noted the Vietnam-era monument needed replacement.  CCT operations in Iraq and Afghanistan were taking a heavy toll on Combat Control warriors.  The names of the fallen were being added to the monument at an ever increasing pace.

Adding new names to the existing monument required attaching the name plates to stone with bronze screws.  The screws used to the mount name plates weathered with the passage of time, and failed.  The base-plate footer, added years earlier, had delaminated from years of sun loading and moisture exposure.

Nearly forty year’s of exposure to direct sun and moisture infiltration weakened the integrity of the structure.  The stone base added years earlier, had been fitted with a metal façade in an attempt to overcome structural failure.  Name tags were detaching from the base.  All attempts at repair proved frustratingly temporary at best.

After months of discussion in a joint effort between the Combat Control Historical Foundation (now the SWS Museum) and the CCA, it was decided that the best approach was to replace the Vietnam-era monument.

Requests for proposal from local monuments contractors were submitted.  Incoming proposals were reviewed jointly.  After reviewing and comparing vendor proposals, a selection was made, and a contract was issued to construct and install the new monument. 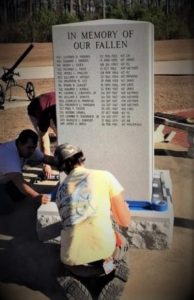 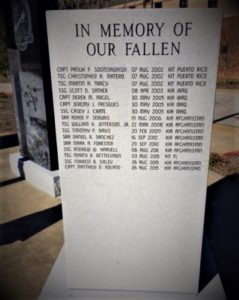 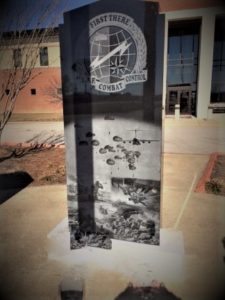 And So It Became, A Re-Imagined Monument Created to Commemorate and Memorialize the Lives of Combat Controllers Who Sacrificed All