Interview with a Legend 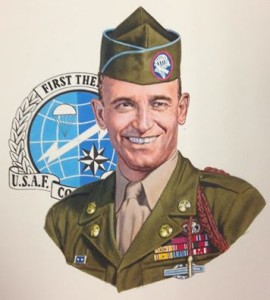 Today I had the pleasure of discussing CMSgt Alicide S. "Bull" Benini’s memories of his transition from the U.S. Army to the U.S. Air Force. For the record, I asked Benini his age and date of birth.

During his four-year assignment to the Pathfinder Platoon, Benini was fully trained in the skills necessary for qualification as a Pathfinder; in addition he was qualified as a Master Parachutist. In 1951, Benini was for promotion and pathfinders were not getting promoted. Much to his chagrin he could see the handwriting on the wall; he had to leave the pathfinders to get promoted!

In late 1951, Benini was transferred to B Company of the Division’s 1 Regiment. The move to a line-company in the Division was made strictly to improve his promotion potential. During the assignment he was deeply immersed in training soldiers; preparing them for deployment to the Korean War. It was during this period that he was promoted to Master Sergeant (E-7).

In the five years Benini was assigned to the Ft. Bragg, two things happened that would have a profound impact on his military career.

In the period before he moved to B Company, an Air Force Captain Jim Baker (a jump-qualified pilot) often visited the Pathfinder Platoon. Baker, the USAF Pathfinder Team Project Officer – traveled from Donaldson AFB, South Carolina to Ft. Bragg on a monthly basis, often spending a week or more in his attempt to recruit volunteers for the planned USAF Pathfinder Teams. Baker often jumped with the Pathfinder Platoon during his visits. It was during one of these visits that Baker and Benini struck up a friendship.

During his assignments at Ft. Bragg, the 82nd Airborne Division Military Police were apparently under-tasked and overeager to enforce any perceived infraction of often vague regulations. Benini was cited several times for minor infractions and on one occasion had to report (presumably for reprimand) to the Division Commander. He was ordered to report, along with all of his intermediate commanders, to answer a baseless charge. With Benini along with his intermediate commanders, the Division Commander Major General Thomas P. Hickey, proclaimed the whole incident and told them all to get out of his office and forget the whole thing. As a result of this and other such incidents, Benini’s dissatisfaction bubbled over and he started looking for a new job, something outside the Division.

In July 1952, the Bull learned that Army Colonel Aaron Banks was forming a new organization at Ft. Bragg. It was to be designated U.S. Army Special Forces (SF) and they would be operating in some old Division buildings on Smoke Bomb Hill. Benini was interested; it was a way out of the Division! Searching through the post telephone lists, he found Colonel Banks’ phone number and called him directly. On the phone, Benini recounted his qualifications and Banks responded; "You report tomorrow, I’ll take care of the damn orders."

After his transfer to the Special Forces organization, the SF staff reviewed his extensive training record and decided that he needed to be an instructor in the newly forming organization. In addition to his professional skills, the SF staff learned that the Bull was fluent two foreign languages. This further enhanced his qualifications for the new SF unit.

All during Benini’s assignments with the Pathfinder Platoon, the Division and Special Forces, Captain Baker continued his monthly visits Ft. Bragg. But he wasn’t having much luck recruiting the soldiers he needed. During one of Baker’s 1952-visits he stopped by to see Benini, to further discuss the Air Force need and urge Benini to strongly consider a transfer. In late 1952, Baker finally convinced Benini to take a trip to Donaldson AFB, to talk to General Douglass about the reassignment opportunity. Benini accepted the visit invitation and drove to Donaldson Air Force Base.

Upon arriving at the General’s office, Baker escorted Benini inside. Baker introduced Benini, then stepped aside allowing the two to talk. Douglass discussed the Air Force Pathfinder plans and promised Benini that he would transfer him over at his present rank of Master Sergeant (E-7). Additionally, he told Benini he would be the first Air Force Pathfinder NCOIC and as such, he would be a leading architect of the new USAF Pathfinder Teams. Benini returned to Bragg with a lot to think about.

Benini decided that he was relatively satisfied with his new assignment with Special Forces, but the Division harassment continued for all soldiers at Bragg; and he was tired of it.

The offer included three promises that, if broken, could prove fatal to his career. Baker told Benini:

 On January 8, 1953 take your scheduled discharge from the U.S. Army, report to Donaldson AFB and enlist in the U.S. Air Force.

 The Air Force will enlist you as an Airman First Class (E-4, A/1C); promote you to Technical Sergeant (E-6, TSgt) on the same set of orders.

 In six months you will be promoted to your current rank of Master Sergeant (E-7, MSgt).

Benini wasn’t overjoyed with the ground rules. But after a great deal of thought about the Air Force offer and the Army harassment, he accepted the offer.

On January 9, 1953, the newly discharged Benini drove to Donaldson AFB. The next day, he was enlisted in the Air Force as an A/1C and promoted to TSgt on the same set of orders. Six months later he was promoted to MSgt – as promised!

In closing our November 19, 2009 conversation, Benini said: Adcock, it was the best decision I ever made."